In 2006, a client came to see Regina Bedoya, ChFC, CLU, so distraught about the breakdown of her marriage that she had thoughts of ending her life. For the first four meetings, the client was determined to blame her soon-to-be ex-husband for her overwhelming grief.

Yet with the support of Bedoya, a 26-year MDRT member from Juno Beach, Florida, and 2020 MDRT President, the client (who had never worked before) not only got a job within a year but thrived in her role and eventually remarried.

“What was amazing to me was the strength of her spirit going from a place of feeling completely hopeless. All we need sometimes is to be held by someone who cares, and we get up and face the world again,” Bedoya said. “I often think about her as one of my heroes because I saw her probably in her worst moment, and now it’s a happy ending.”

This is far from the only time Bedoya has helped a client recover from the unanticipated. With two other staff members and 350 clients spread among Florida and Georgia, her practice focuses largely on what she calls “women in transition.” That often pertains to divorce (though sometimes it’s the loss of a spouse or moving toward retirement) and needing help to regroup and achieve financial peace of mind during a trying emotional time.

I absolutely love visiting our members where they’re from. They come alive in their countries, and there’s this genuine generosity of spirit toward MDRT.

This was not the plan. When Bedoya, who was born in Michigan and raised in Paraguay, started in the business, she focused on building wealth and helping clients prepare for retirement. It was only after she experienced her own divorce in 2001 that she realized people going through what she went through needed an advocate who could provide both financial and emotional support.

“Initially it was like, ‘Maybe I should be doing this.’ You have a thought, and it goes away,” Bedoya recalled. “Then it became more of a loud whisper, and eventually a strong urge. ‘You need to be doing this. This is what you’re here for.’

“The more I did it, the stronger I got. And the happier I became as I realized what happens to you doesn’t have to define you, and at the same time it can be a trigger to something better.”

The notion of strength comes up a number of times when talking with Bedoya. She mentions it in reference to the two brain surgeries she had eight years later. During treatment, she found she had absorbed the resilience she so often saw in her clients.

“These women were teaching me that adversity doesn’t mean failure; it’s testing what you’re made of,” she said. “So when I faced a new life challenge, it was a piece of cake, frankly, because I knew that this too would pass.”

LIKE MOST ADVISORS, the new MDRT President definitely did not have that degree of balance and certainty earlier in her career. She felt intimidated at her first Annual Meeting in Dallas, Texas, in 1994, where then-president Lyle L. Blessman, a 56-year MDRT member from Denver, Colorado, came out on the Main Platform stage wearing a cowboy hat and riding a white horse.

“Had someone said to me, ‘Someday you’ll be President,’ I would have thought, ‘You are absolutely out of your mind,’” Bedoya said. “I thought it needed to be this huge producer with more than 100 people working for him, and notice I’m using ‘him’ and not ‘her.’ At the time, we had never had a female president.”

Yet Bedoya also found herself deeply moved at the meeting, blown away by the ideas she heard and the commitment of MDRT members to helping their clients. “I was so impacted that I became very emotional during the ride back to the airport,” she said.

For her own address as incoming President at this year’s Annual Meeting in Miami Beach, Florida, she had not initially planned to talk about her divorce. But she was encouraged by the notion that her speech could help other members learn who she is and what life has taught her, rather than focusing on her business practices.

These women were teaching me that adversity doesn’t mean failure; it’s testing what you’re made of. So when I faced a new life challenge, it was a piece of cake, frankly, because I knew that this too will pass.

“My job is to hopefully inspire our membership to embrace our association, to give back, to serve others, and to share with fellow members who they really are,” Bedoya said. “I can’t expect them to do that if I don’t do it. It’s about showing humanity and vulnerability.”

Bedoya had never spoken publicly about it before, largely because she had decided to move on and look ahead. And while dwelling on the past was not a choice she wanted to make, she agreed to share her story of adversity in hopes of helping others move forward as well.

She doesn’t spend time now thinking about her divorce or her brain tumor or her sons’ past medical incidents, including open heart surgery. “People ask, ‘How is your health?’” Bedoya said. “I’m like, ‘It’s great! Why are you asking?’”

Yet speaking for the first time about the life change that prompted a refocus of her target market, Bedoya showcased her ability to harness strength, empathy, vulnerability and triumph all at once.

“I could become a victim and blame others for my situation, or I could choose courage and forgiveness and ultimately love — love for myself and unconditional love for those who relied on me,” she said. “I found great satisfaction at witnessing the transformation that occurred in my clients’ attitudes toward life: going from feeling victimized and hopeless to a place of power and possibilities.”

BEDOYA did not plan to be a financial advisor; she began her career in banking. But a meeting with Charlie Smith, a managing director at Prudential, changed everything.

“He was the epitome of a great leader. He knew why he did what he did, and it was all about making the lives of others better,” she said. “He would follow up on what you were working on. If I was stuck on something, he would help me clarify it. He would spend Saturdays training us when he didn’t have to.

“Oftentimes he did it twice. He would have us do the whole training and then come back to do it all over again. He would say, ‘The second time you hear it; you’ll actually learn.’”

It is not hard to see Smith’s virtues flowing through Bedoya’s practice. In fact, minutes before her interview for this story, Bedoya met with a new client who was still working to rebuild three years after her divorce. Most of the meeting involved talking about the client’s family, lessons she learned from parents about money, and what she wanted to leave as a legacy to her own children. They also discussed turning her dreams of becoming a life coach into reality.

“After 90 minutes, my schedule forced me to end the meeting; she wanted to stay longer because she’s been interviewing different advisors and said, ‘It’s the first time someone has asked me about my family and what I really want to accomplish with my life and not just, ‘Can I see your statements from all your investments?’ so they can tear it apart and propose something new,” she said.

CARING FOR PEOPLE is deeply ingrained in Bedoya, a mother of four and grandmother of seven. She’s also the oldest of nine siblings and daughter to a father who is still practicing medicine at 93 (“patients refuse to go anywhere else”) and a mother who Bedoya says was “authentic and passionate about the people she cared about.”

That emphasis on connection is of course a major part of MDRT, relating not just to clients but other members as well. With fellow members, Bedoya has experienced sunrises in Singapore, shopped in Hong Kong, visited a spa in Jakarta, eaten off-the-beaten-path meals in Bangkok, and teared up as a mother told a story about her son at an MDRT Day in Korea. It’s all part of the Executive Committee’s global reach in supporting and connecting MDRT’s expanding worldwide membership.

“I absolutely love visiting our members where they’re from. They come alive in their countries, and there’s this genuine generosity of spirit toward MDRT,” she said. “We all want the same thing: to serve clients, do the best possible job, protect families and provide resources to give people a good life.”

BEING MDRT PRESIDENT means leading the Executive Committee in executing a wide range of significant priorities for the organization. For Bedoya, these include: 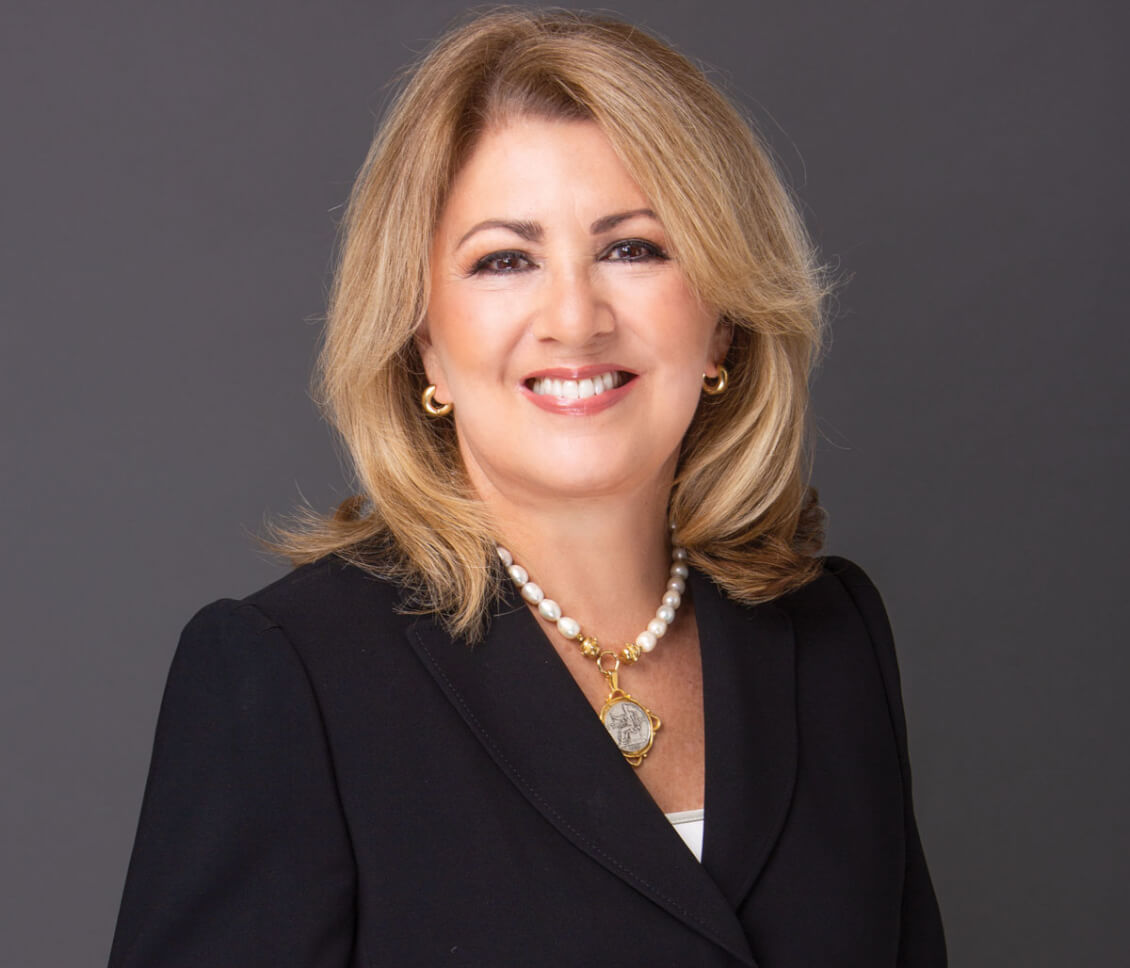 As part of the Executive Committee, Bedoya is proud to have been an independent thinker who kept a focus on adding value to members. As President, she recognizes that the quality of members is more important than quantity. She aims to support existing members and attract new ones through timeless values of integrity and excellence, as well as the Whole Person philosophy.

In her own life, Bedoya visits her sisters and father at least once a year in South America and her four children (spread around the U.S. in New York, Michigan, Pennsylvania and Florida) at least every other month. She also serves on her church board and participates in a study group with four other female MDRT members. The group is called MAIA, named for the Greek goddess of growth.

It’s fitting for a number of reasons. One is how far Bedoya has come, from observing her grandfather’s insurance office in Paraguay when she was 10, from the start of her career, and from her own personal challenges to emerge resilient and successful. Perhaps it’s not surprising that in her office she does not have a desk.

Client meetings take place at a friendlier place, one that can’t help but symbolize constant change and development: a round table.