It will not surprise you that insurance companies — like all businesses, really — do not prefer to take on 100 percent of risk if there is an effective way to lessen their exposure.

It may surprise you, however, to learn that organizations can simultaneously lower their risk and increase their profits by owning their own insurance company through a process called captive insurance.

Wait. That sounds kind of confusing, and it can be. Ten years ago, when Jeremy Colombik began explaining the concept, the nine-year MDRT member from Raleigh, North Carolina, received plenty of glassy-eyed stares. Now, he has a time-tested PowerPoint presentation, a two-minute video on his website (themsicorp.com) and a concise elevator explanation ready to go:

Before we get to those benefits, some background: Colombik entered the financial services profession straight out of college and first got to work reaching out to business owners, who he found were hearing the same pitch over and over from countless advisors.

When his dad, a tax attorney who had learned about captive insurance several years before at a tax seminar, shared the information with his son, Colombik recognized he could open doors with business owners by discussing this relatively obscure concept rather than leading with talk of life insurance and other more common vehicles. That led to life insurance opportunities with business owners like one client who started working with him because of captive insurance solutions. Less than a year later, that client purchased a policy that provided $600,000 in premiums.

“I never would have had that opportunity if I was not involved in captive insurance,” said Colombik, who started his own practice in 2007 and now has 15 people as part of the MSI team, with offices in Chicago, North Carolina and Puerto Rico. Working with celebrities, media moguls and multi-millionaires while partnering with CPAs, laws firms and advisors who pass along their clients and earn a referral fee, the company’s trademarked slogan is, “Risk management made profitable.”

Some starting points for captive insurance: 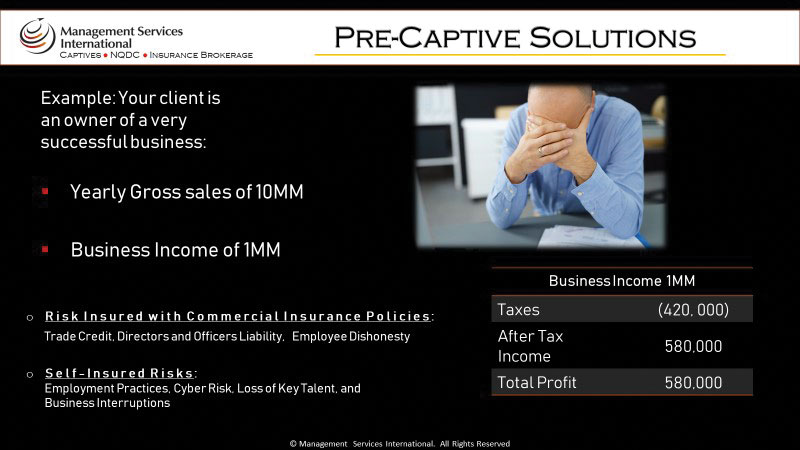 Those are the basics. So what are the five benefits that Colombik communicates to clients?

“Clients are like, ‘This is a win-win,’” Colombik says. “’I’ve got better coverage and more money.’”