What if it was your child?

Alarmed by the existence and frequency of human trafficking, The Exodus Road co-founders Matt and Laura Parker moved to Southeast Asia, where Matt soon became an undercover investigator to stop this practice. He discusses his experience going undercover in more than 2,000 brothels on four continents and his work with The Exodus Road, which has rescued nearly 1,000 victims of human trafficking.

It’s wonderful to be here at the MDRT. I’m here to tell you all that we have a problem. Human trafficking. It’s a global issue and the United Nations International Labour Organization estimates there are more than 40 million modern-day slaves. Forty million is an overwhelming number! So, how are we possibly going to solve this problem?

Before I answer that, let me give you a sense of what human trafficking is—and what it looks like. It is the use of force, fraud, or coercion for the purpose of exploitation. So that can look like kidnapping. We’ve all heard of kidnapping, but this is kidnapping people for the purpose of selling them—over and over and over. Something we see all the time at The Exodus Road is the use of lies told to someone who’s desperately poor. It’s the fraud that there’s a great job just across the border or three towns away. Then the unsuspecting boy or girl, or the impoverished man or woman, gets on a bus or gets on a plane—which they don’t really have the money to pay for—and once these people arrive at that promised job, they uncover the fraud, and they’re trapped in it. There is no job, there is no money for them, and there certainly isn’t a way out. The truth is, they’re sold into prostitution or they’re sold to a shrimping boat or to some corporation that will never pay them what was promised. And this is happening all around the world, here in the United States, here in California.

Please take a few seconds with me to imagine yourself in that situation. You’re desperately poor, you need to feed your family, you need a job, and somebody offers you a dream opportunity. And you go after it, and once you’re there, not only is it a false promise, but you don’t speak the local language, you don’t have anyone to call for help, they threaten you if you run, or they threaten the person next to you if you run. So often we forget how wonderful life is for most of us and how awful it can be for someone else. So we go about our lives not really concerned about much but our own day, and we walk right by those who actually need us.

In 2011, my wife, Laura, and I moved to Southeast Asia with our three children; we have two daughters and a son, 10, 12, and 14 years old. I love my kids—I love all children—so I moved my family to run a children’s home in the north of Thailand. It was home to 48 young girls from the impoverished village communities on the border of Burma or Myanmar. While doing that, we heard a rumor in the community that brokers—men—would go to these villages and offer employment, but only to the pretty girls. This really disrupted me. I was compelled to drive to these villages, and I interviewed the village leaders. I asked them, “Does this happen? Is this rumor true?” And they all categorically said, “Yes, this happens all the time.”

So this was the problem I began to see—human trafficking was happening in a systematic way. Brokers were taking pretty girls from villages and promising them jobs in restaurants or jobs at a massage parlor in Bangkok, but these unsuspecting, innocent girls would get to Bangkok and realize that they were going to be sold into prostitution. So I began to work with law enforcement on this rumor, to share what I was learning, and they invited me to consult with them. I spent one year researching human trafficking in Southeast Asia—what law enforcement was doing, what it wasn’t doing, what was working, and why it wasn’t working. Then I got a phone call that would change my life: A suspected trafficker was selling girls in Bangkok, and I was asked to go undercover as a “john”—a buyer—and pretend I was a sex tourist. My assignment was to learn whether or not these girls were, in fact, being sold. I accepted, and three days later, I was undercover in Patpong, Bangkok’s oldest and largest red light district. This is what it looked like. [visual] As you can imagine, there was incredible sensory overload—the lights, people pulling on you, drugs being sold, women being sold, boys being sold. It overwhelmed me; it destabilized me.

As I went into this brothel, I sat next to a little girl named Belle, and she wore a number on her shirt. Because, you see, you don’t have to speak the girl’s language. You just pick the number of the pretty girl you want to have sex with. You never have to speak a word to them, and it’s only $40. For that, you get an hour or two with a girl to do whatever you want. And these girls are forced to have sex with up to 10 men a day.

There’s a lot wrong with this, but here’s the real problem: This is not prostitution. These are not willing participants. These are impoverished children who are lured, trafficked, into a situation where they don’t get to keep that money or their virginity or their dignity. I came back from that first undercover experience and sat down with my wife, Laura, and I was broken. I told her it was the absolute hardest thing I’d ever done—to leave Belle in that brothel. I had held her hand, and I learned that she absolutely hated what she was doing and that she was poor with no way out. I said to Laura, “If something happened to our kids, whom I love more than life, I’d do anything to protect them. But if I were a poor farmer in the northern villages, and we had five kids and we couldn’t feed them, we’d send one of them down to Bangkok to work and have a better job. That’s not a bad desire as a parent. But if I were deceived as a father, and I then learned that I had sent my little girl to Bangkok and she was being raped for profit 10 times a day, what would I not do to get her home?”

The problem is, poor farmers don’t have iPhones. Poor farmers don’t have vehicles. They don’t have teams of people who can go and rescue anyone. I looked at Laura, and I said, “I think we have to do this. I don’t want to live in a world where people are sold, and I don’t want to leave that world for our kids. I have to step into this.” And she agreed with me. So I became an undercover investigator of human trafficking crimes, and over the last seven years, I’ve been in more than 2,000 brothels on four continents. But I never wanted to be the hero, so we built a machine called The Exodus Road.

Since that day, we’ve hired 63 investigators, and we operate in six countries. And we’ve rescued just under 1,000 victims of human trafficking—men and women, boys and girls. Today, I’m here before you because I actually believe the solution to human trafficking is not Matt Parker. And it’s not The Exodus Road, at least not alone. The solution also sits with you, sitting in this room. You have an amazing power. You have money, but you also have a voice, and you have influence. Together, we could do so much to radically change the face of human trafficking in our time.

At The Exodus Road, we collect these stones. This is an ordinary river rock. [visual] For every single girl, boy, woman, or man we rescue, we write his or her name on a rock. You saw it in the opening video. We write their name on the rocks and the date they were rescued and the investigations team who extracted them. Why? Because 40 million is overwhelming, and it’s hard to comprehend. And social evils that big tend to paralyze us, don’t they? The problem’s too big, so we don’t do anything. But when you bring it down to the one—the one boy, the one girl—you can see, you can actually feel how much every little girl and every little boy matter. Each one is someone’s son or daughter, sister or brother, a future husband or a future wife and mother. And everyone is worth it.

It’s important to remind you that human trafficking is a global problem. It doesn’t happen just in Asia. That’s where I got started, but The Exodus Road works here in the United States too. We are rescuing kids all around the world, and we need help to keep making that possible—and to expand the rescue we can offer to those who need it so desperately.

So, right now, I want to ask you to join us in our work by visiting the MDRT Foundation booth and financially contributing to The Exodus Road so that we can bring more rescue in the world. I also want to ask you to attend my Operation TrafficWatch Session later today, where I will teach you how to identify trafficking and trafficking victims in your own communities. Your involvement and financial help will equal freedom for someone, I promise. 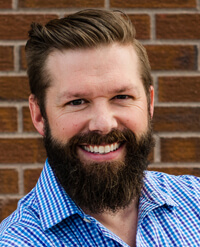 Matt Parker, his wife, Laura, and their children moved to Thailand to work at a home for impoverished girls in 2010. While there, he began networking with local police to research the issue of human trafficking. In 2012, Matt and Laura launched The Exodus Road, a USD 2 million charity organization that has supported the rescues of nearly 850 human trafficking survivors and the arrests of more than 300 perpetrators. They operate in multiple countries, equipping local communities and using advanced technology to fight systematic slavery.