Hu explains why selfless referrals are a key component of putting the clients’ interests first. Presented at the 2017 Annual Meeting.

I am honored and humbled to share my story. I joined this industry at 21 years old. I wasn't sure what I was doing in financial services and what it was all about. At first, I thought this business was about selling the insurance and investment products we offered. However, I quickly realized that it was never about selling.

Clients work with us not because we sell them, but because we help them with problem solving. A good financial advisor is able to understand the problems of clients, offer sound solutions, and help them with implementation of these solutions. Clients don't care how much you know until they know how much you care. I believe that the most important characteristic of a successful advisor is love.

John,
I'm glad you found today's meeting to be better than expected. My mission and passion is to help as many people as possible. As you can see, I am passionate about we do and the opportunity to help others. What's interesting is that I would never have met you if it wasn't for the introduction through Mike. With that being said, at our first meeting, we want to brainstorm with you six other individuals whom we can help. Why six? Because, I'm sure, John, that you know hundreds of people. But, based on our time and availability, at our first meeting, we can only extend to you six consultations. In 2008, I was already an advisor. During the recent recession, there were articles that came out saying that more than half the people in the country will not retire by age 70. John, early in our conversation, one of your goals was to retire by 60 and have $3 million. I can't imagine you or me working past age 70. But let's fast-forward—you're now 60 years old and have $3 million in retirement assets. You're probably going to have a retirement party. At your retirement party, you're probably going to invite your family and your friends. Let's say your best friend, Steve, says to you, "Hey, John, you and I are around the same age and have the same income and same lifestyle. How are you able to retire and I'm still working? What is your secret, John?" John, you're probably going to share with Steve that, about 30 years ago today, you met an advisor through a colleague named Mike. When you and I first spoke, we created a financial plan. I educated you on how to save efficiently, plan for your children's education, buy your first home, and, of course, retire. When your best friend, Steve, hears this, he will be thinking one of two things. One, he is going to be really happy for you—he's your best friend! He wants you to be debt free, be able to pay for your children's education, and have financial freedom and retire. You know what the second thing is: Steve may be thinking in the back of his mind that he might be a little saddened that you were not kind enough to share this experience, just as Mike was kind enough to share with you. Because Steve could be half the people in this country who could not retire by 70. So, John, who are the six most important people in your life whom you most care about and who you want to make sure will become just as successful as you will become in the future?

That is my referral language. That is a selfless referral.

If you listened to the core content of my message, it was never about Rick Hu the advisor when I asked for referrals, but it was about John. "John, who are the six most important people in your life whom you most care about and who you want to make sure will become just as successful as you will become in the future?" It is about asking the prospects and clients for help so that they and we both can help others. It's about selflessly serving and helping the community.

Speaking of selfless referrals, I want to share with you the passion behind it and one of the most selfless referrals I've ever received. At 23 years old, just two years in the business, I asked an existing client for introductions to her sister and brother-in-law. Initially, the client wasn't sure if we could provide any value to them but believed in our team and the work that we did. When I first called the referrals (the sister and brother-in-law), they initially hung up on me. A few days went by, and I tried again and told them why it was important to meet. They mentioned that they would call me when they were interested. A week went by, and I gave them another call to just extend to them a courtesy meeting. They said, "Fine, we'll sit down with you." After finally sitting down and meeting for an hour, they found so much value that they implemented all of the recommendations we suggested. Fast-forward 11 months later, and I didn't get a call from the sister or brother-in-law, but I got a call from the existing client, the original nominator. My initial client called me, and I heard a tremble in her voice. I asked her if everything was OK. She said that her brother-in-law, the past weekend, had had a heart attack. And, unfortunately, he had had a heart attack while driving his truck and had passed away. The existing client asked me, "Did they do any financial planning, and will your company pay out?" And that was probably the hardest question I've received in my career. But I knew the only answer was the honest answer, and that was that I did not know. It was my first death claim, and the policy was written within the contestability period. My immediate reaction was to tell my client that I would do everything and anything possible to help her sister and her family. And during that time—2008 and 2009—with the financial crisis, with all those financial crises, all those negative media reports about financial firms, I did not know if our firm would pay out. What I did know was my responsibility and commitment to my client.

I went back to the office and grabbed their files, and for two weeks, I did everything I possibly could. I called the funeral home; I called the hospital; and I called the family. Finally, two weeks later, our firm made a decision. At this point, I promise you that if the decision were anything different, I wouldn't be here today, sharing my story. I would have immediately left the industry. But because our company discovered that it was an accident—a 52-year-old wasn't supposed to have a heart attack without any preexisting conditions—it paid out the claim. When I was asked how this claim should be delivered, I requested to have the claim check mailed to me. I knew that if it was lost how difficult it would be for them. I personally took the check and delivered it to the spouse's home. When I knocked on her door, the widow opened the door and immediately burst into tears. I remember that, at 23 years old, I was unable to control my emotions. I began tearing as well. I said to the client, "I'm so sorry for your loss. I wish we could've done more." The next thing she said to me changed my outlook on my career forever. You see, she wasn't crying tears of sorrow; she was crying tears of relief. She said, "No. Thank you. If it wasn't for your patience, the fact that you met with us and educated us, we wouldn't have these proceeds. With these proceeds, we can pay for the funeral expenses; we can pay our bills; we can keep our home. And now, instead of working full-time, I can work part-time and be home as both Mommy and Daddy. You're our hero!" It was at that point, at 23 years old, that I realized what we do. I realized I am not a financial advisor. I am not a wealth manager. All I am is a person on a mission with a passion to serve and help my community. And I feel the same way about all of you.

Remember MDRT. Every one of you are heroes in this room. Every one of us is given a gift to make a profound impact on the lives of the people we meet. Everything we do, each and every day, is a selfless task. We all have a mission, a passion, and the commitment to serve our communities. So I want to thank you for all you do.

In closing, I want to leave you with a part of a poem that I believe is very important:

To the stronger or faster man;

But sooner or later the man who wins

Is the one who thinks he can!

Thank you, MDRT. Thank you for all you do. Continue to go out there and selflessly serve the people you love. 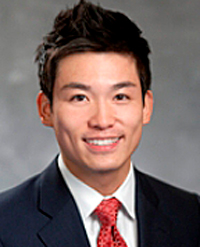 Rick Hu is a six-year MDRT member from New York, New York. He has won numerous company awards and been featured in several online publications, including Forbes.