Using a blend of illusions and comedy, Riggs has been recognized as one of America’s Top Five Most Entertaining Speakers. He emphasizes how a positive attitude directly impacts success and demonstrates how optimism and determination can help you and your business. Presented at the 2017 Annual Meeting.

Well, I have a very important question. It is this. How can you take all of the wonderful information you have gleaned here in Orlando, go back home with it, and apply it effectively to your business and personal life? Now, my name is Billy Riggs, and I am not merely an illusionist. I am what I call a dis-illusionist, which means I don’t get nearly as excited about performing my illusions as I do about getting into your heads and exposing your illusions. Damaging psychological illusions. Faulty perceptions of the world that form glass ceilings in your head. Self-imposed barriers to success through which you cannot break.

Let me tell you what the grandest illusion of life is. It is this. That I just don’t have what it takes to achieve greatness in this life. Self-esteem is destiny. Change that and that’s when magic happens.

What you just saw is a table moved by an invisible force. [visual] A completely natural force I assure you. But your life, in a similar fashion, is moved by a host of invisible forces—your beliefs, your assumptions, your biases. But at the top of that list, I would have to place your self-image.

I would like to introduce you to my pet, Toby the tortoise. This is what Toby looked like when my wife found him in the woods near our home in Austin, Texas, in the year 2000. [visual] She brought him home to show to our son, Cameron, who was only a year old at the time. This is my boy on his first birthday. He’s now 18. And ever since that day, Toby has wandered our fenced-in yard. Toby and Cameron have grown up together.

And this is a picture of Toby taken exactly one year later. [visual] Toby is full grown, being held by my daughter, Sarah, who was sitting with a family friend. At least we thought Toby was full grown because up until this stage of his development, we just assumed that Toby was an ordinary, run of the mill, Texas box tortoise. Boy were we wrong. We began to wonder if maybe we were feeding him too much when, three years later, he looked like this. [visual] And four years later he looked like that. And five years later he looked like this. Toby, as it turns out, is an African sulcata tortoise. Apparently, he was somebody’s exotic pet that escaped as a baby. Toby weighs over 90 pounds, and he’s not even half grown. His species is the largest land tortoise in the world outside the Galapagos and a few other remote islands.

This next photograph was taken at Halloween five years ago. [visual] Toby went trick or treating dressed as Lady Gaga. And the family resemblance is astonishing. This is what Toby will look like in 100 years. Toby is a magnificent creature, but Toby has a problem. Toby has a problem I’ll bet some of you have. Toby has a self-image problem. It’s true. Toby is huge, but he thinks he’s small.

We have a wrought iron gate that leads from our back sidewalk to our driveway. The iron bars are two and a half inches apart. I measured them. Toby is constantly trying to walk between them. He gets his head through and has no idea why he stops. He’ll walk in place for a minute and a half before he figures out he hasn’t gone anywhere. Toby is forever trying to walk under things that are only six inches high. There have been many occasions during which we’ve been sitting at the dinner table only to look out the back window to see lawn furniture moving across the yard.

I have one final photo. [visual] This is Toby hiding. He’ll stay there for hours thinking nobody can see him. You see, after living with Toby for more than a decade and a half, I am convinced he has no idea that back part even exists. Toby is huge, but he thinks he’s small. And because he thinks he is small, he lives as though he is small. Every year Toby has grown larger, heavier, stronger, and more powerful until present day, he is downright unstoppable.

Our old wooden fence grew progressively more rickety and rotten until I finally changed it out a while back. There were places I could break it off with two fingers. Toby could have walked right through it like it was made of paper. If only he knew that he could. Toby is not confined by our fence; Toby is imprisoned by his ridiculously low estimation of his own capabilities. Toby is held captive by his overblown, exaggerated view of the obstacle that lay in his path.

I’ve told my friends for years that if Toby ever figures out what a magnificent and powerful creature he is, God help us all. We won’t be able to keep him. We’ll have to put him in a zoo. And if you ever figure out what a magnificent and powerful creature you are, God help anybody who tries to stand between you and your dreams. If you do not believe in yourself, you will give up way too early. You will throw in the towel way too soon. And all of the wonderful things you’ve learned here at the Million Dollar Round Table will do you little good because you’ll go home, you’ll apply them under-confidently for a few days, decide they don’t work, and then go right back to doing things the old way.

Suppose you were in prison doing hard labor. You’ve been given the job of breaking a boulder with a sledgehammer. You hit it once, nothing happens. Fifty times, no difference. Seventy-five times, no visible change. Ninety times, it is as though the boulder is mocking you. Ninety-nine times, you’re on the verge of giving up. But on the 100th strike, it shatters into a thousand pieces. Here’s my question. Which strike broke the rock? All 100. You can’t go out there and hit it the hundredth time to begin with now, can you? And if you give up on number five or 75 or 95, you never see the results. Sales is the process of hitting the rock over and over and over again knowing that the vast majority of the strikes will yield no visible results whatsoever. But they will, however, invisibly weaken the rock’s resistance. Sales is the system. It is a system of calling people on the telephone, meeting them in your office, purchasing email lists, sending email blasts, conducting seminars, collecting referrals, updating your Facebook page, writing blogs and articles, conducting your annual reviews, and networking relentlessly. If you work the system, the system works. If you keep hitting the rock, the rock will break, but if you quit, somebody else will come in right behind you and hit it the hundredth time and reap all of the rewards of your labor.

I think this quality of persistence is what makes us appreciate the fictional character, Rocky Balboa, so much. Why are they still making Rocky movies 40 years after the first one came out? What is it that we love about Rocky? I think it’s his heart. Here is a small, mediocre, dimwitted boxer who gets beaten into a bloody pulp almost every time he steps into the ring. But the guy just never quits. One of my favorite scenes in all of the Rocky movies occurs in Rocky II, which features the rematch between Apollo Creed, heavyweight champion of the world, and upstart Rocky Balboa.

The scene I’m remembering takes place in Apollo Creed’s plush office. His staff is gathered around him talking about the possibility of a rematch with Rocky, and Apollo’s manager is dead set against it. The champ wants to know why. He says, “What are you afraid of, Tony?” The manager says, “Honest?” Apollo says, “Honest!” The manager stands up with terror in his eyes, walks over to Apollo’s desk, and says, “He’s all wrong for us, baby. I saw you beat that man like I never saw no man get beat before, and the man kept coming after you. Now, we don’t need that kind of man in our life. I know what you’re feeling. Let it go.” Then he leans forward and pleads, “Let it go.” But Apollo can’t. His pride is wounded. He has to prove to the world that the split decision in the first fight was a fluke, and so the rematch is on. And out of the pure raw talent, Apollo Creed comes out for the first eight rounds and proves that he is, indeed, the best boxer in the world. He pounds Rocky mercilessly. Knocks him to the mat time after time after time.

But then at the end of the eighth round, all of the bravado on Apollo’s face morphs into just a hint of bewilderment. And you know what he’s wondering, How is this man still standing? Then Rocky comes out and barely wins round nine on points. And the bewilderment on Apollo’s face gives way to a hint of doubt and fear. Out of blind fury, Apollo comes out and wins rounds 10, 11, 12, 13, and 14. But after every round, the fear and doubt in his eyes grow greater. And finally, just before the bell rings to start the 15th and final round, destiny sets in on Apollo’s confidence. He finally gets it. At long last, he figures out that you can’t beat Rocky. Because it just doesn’t matter if you’re better, bigger, faster, stronger, smarter, richer, better trained, hit harder, land more punches, or knock him down in every round because every time you do, the guy just gets up again. 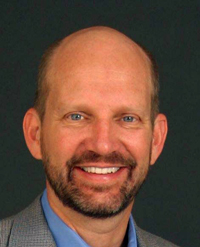 Billy Riggs, CSP, has been recognized as one of America’s Top Five Most Entertaining Speakers. He uses his illusions and comedy to grip audiences, move them to action, improve attitudes, turbocharge service and sales, and change lives.